Accepted as a Business Member of the Association of Professional Piercers (APP) in 2003 while working at The Hive in Moses Lake, she moved up in the organization, eventually serving as the APP Secretary from 2005-2007 while living in Oklahoma City. Her position on the APP Board of Directors gave Chrissy the opportunity to review membership applications from piercers all around the world and provide suggestions to improve their health and safety standards.

She developed a well-rounded background with experience in all piercing procedures through working in multiple studios across the country including Evolution in Albuquerque, 23rd Street Body Piercing in Oklahoma City, and multiple High Priestess locations in Oregon, in addition to a wide variety of guest piercing opportunities. Chrissy is a member of the APP Legislation and Regulatory Affairs Committee, having served on a legislative committee in Oklahoma in 2006, a regulations committee in 2011 which evolved into serving as the 2012-2013 Vice Chair of the Oregon Board of Body Art Practitioners, and most recently she was selected for a regulations committee for Washington State in 2016. She is passionate about the dissemination of health and safety information and has been grateful for the opportunities she has been given to help raise standards in the piercing industry.

Chrissy actively contributes to the piercing industry in addition to her legislative efforts. She has written articles for industry publications, The Point and Pain Magazine. An experienced educator, Chrissy has taught many classes at various annual Association of Professional Piercers Educational Conferences. (See the full list of classes that she has taught and attended in the "Training and Education" section under the "Studio" tab.) She has also been the coordinator for a private scholarship, the "No-Excuses Scholarship", which provides low-income piercers the opportunity to attend the annual APP conference.

Many people who participate in social media have seen her most famous contribution to the piercing industry, the popular triple forward helix piercing. Chrissy created this “ear project” in 2008 and due to the increasing popularity of Pintrest at that time, her photo went viral and the triple forward helix became an overnight sensation. The full story about this was published in the APP Quarterly Journal, The Point.

In addition to her professional pursuits, Chrissy spends her downtime volunteering in her community and spoiling her three cats.  She loves road trips, martial arts, classic cars, bowling, playing Cards Against Humanity, going on adventures, and making fun memories. 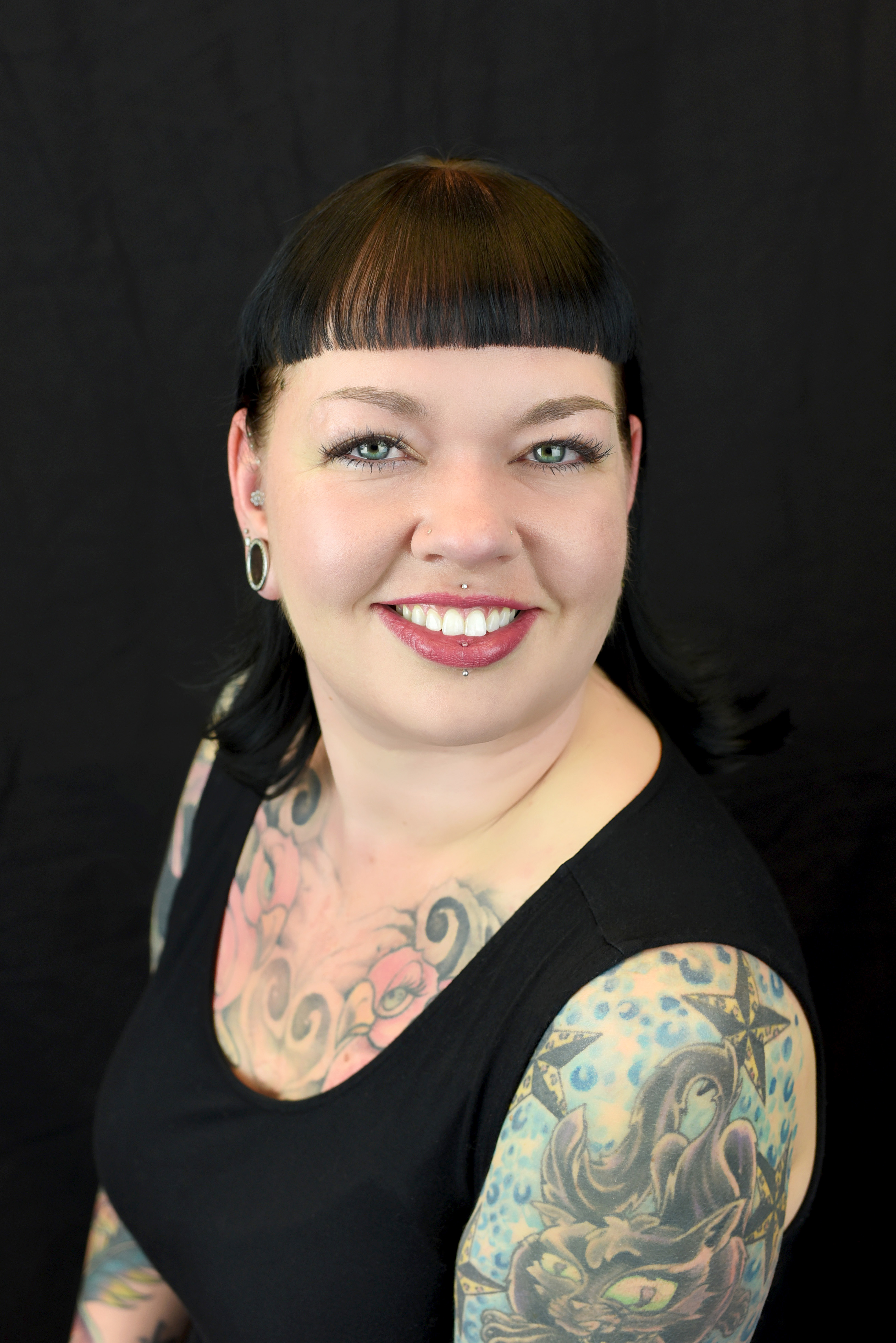 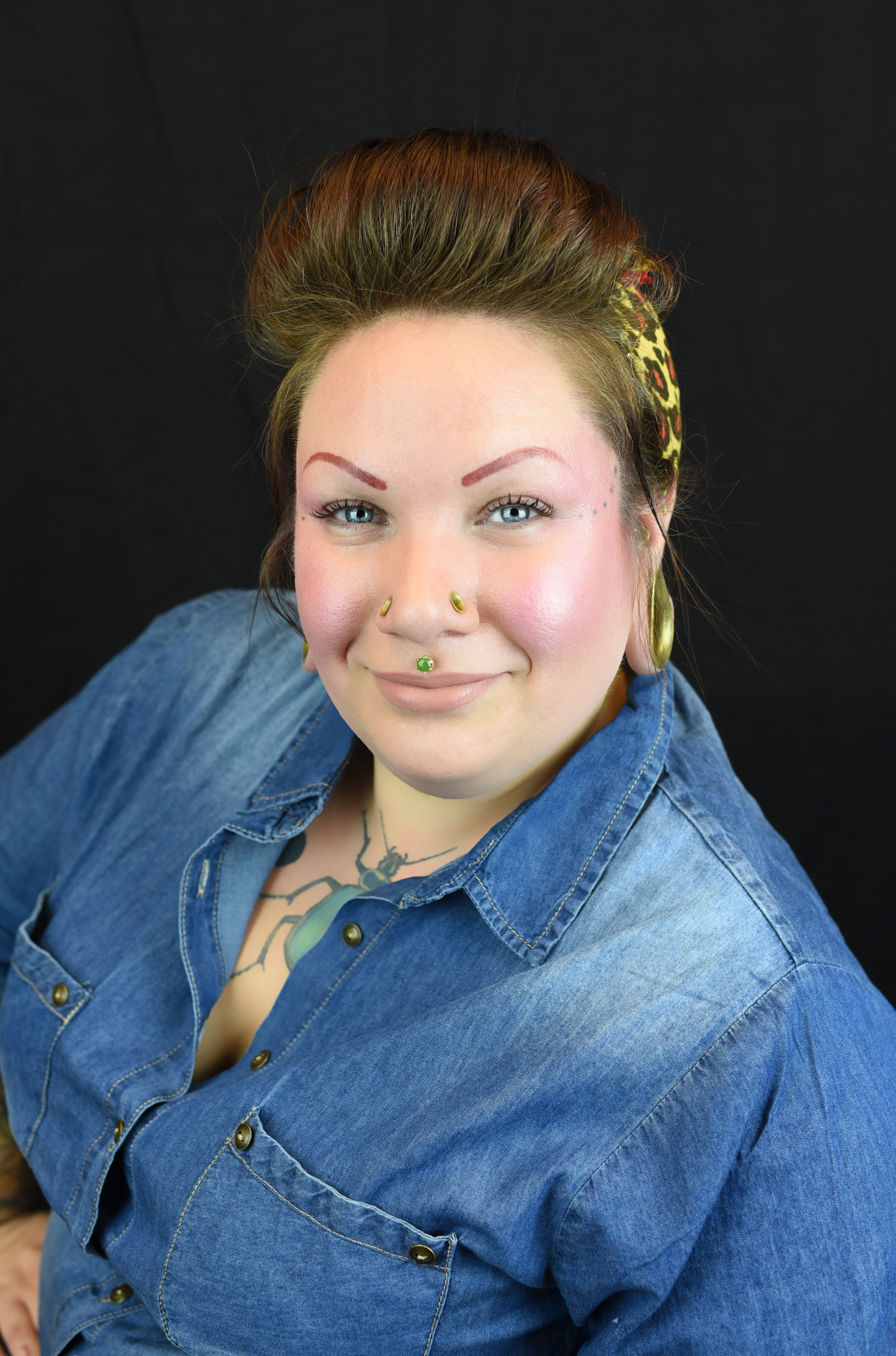 I hail from Oregon where I enjoyed many years of rain and study. At University of Oregon I majored in mathematics (emphasis on secondary education) and minored in philosophy. Spending so many years in a structured setting felt natural but I got restless. Being out of doors helped me find balance. I discovered a passion for anything nature could provide. I love hiking, kayaking, ocean swimming, waterfall exploring, and cycling. I love doing these things so much it’s a dream of mine to do them around the world; upon retiring I want to travel the world exploring, celebrating and immersing myself in culture.

I have teeny (okay, not so teeny) fascination with Big Foot. I have an outright obsession with a well dressed man sporting a man bun and/or dreadlocks. Cat shirts are up there with the best of them. Maybe if you’re a man with dreads put up in a bun and you would like to bring me a cat shirt and take me Sasquatch hunting that would be okay (arriving on golden roller skates optional but would be awarded with a high five).

My friends are the most amazing people in the world and I love spending time with them. Sushi, Netflix and gangster rap are pointless without them. I am also very passionate about my Adidas; they make me jump higher, run faster and dance harder than any other pair of kicks. Some other little things that bring me great happiness include Lil Wayne, a soy chai with peppermint, the perfectly crisp and refreshing elation only a cold Moke can bring, how dubstep and Midwest hip hop have the ability to commandeer mind and body making life forgettable.

I have two cats who are terrible monsters but I adore them regardless. MonTQ is my mama kitty; she likes long walks in the snow and has a crotchety disposition. TuneChi is my handsome man; he likes to chase bugs and calms my heart when it’s upset. I’ll probably acquire more kittens over time making it harder to dispute the “crazy cat lady” accusations I’ve already heard whisper of. This is why I’ll end up on the speed dating circuit looking for love. Given enough time I will find and marry Kid Rock. Twice.

I dislike many things. The list is topped by bananas and Nicholas Cage.

I am very excited to be a part of the Integrity family! I love what we do and our beautiful clients that share their experience with us. They are the reason every day is fun. Let’s be as fancy as we wanna be!